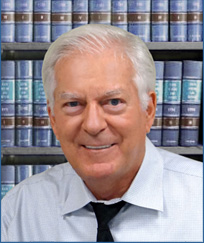 Douglas B. Hanna, has become known as one of New Jersey's top trial attorneys. Mr. Hanna has settled and tried thousands of cases with nearly four decades of success. Throughout his career, Mr. Hanna has tried cases and won settlements for numerous victims of accidents, trauma and personal injury.

Douglas B. Hanna has been named a top New Jersey Super Lawyer by New Jersey Monthly Magazine based upon a survey of New Jersey judges and lawyers. The title of Super Lawyer is not easily attained. The process begins with scoring from a blue ribbon panel. Nominees endure an extensive research process that includes interviews, independent research, data verification and a good standing review. The final selection process, candidates are divided into groups based on firm size and geography where the top performers are awarded the title of Super Lawyer.

Douglas B. Hanna has also been certified and named as a member to the Million Dollar Advocates Forum, recognized as the most prestigious group of trial lawyers in the U.S. with membership being confined to attorneys who have won cases in excess of $1,000,000. The Million Dollar Advocates Forum was formed in 1993 4000 members country wide. Less than one percent of all U.S. lawyers are able to attain membership.

Lecturing extensively on the subject of civil trial preparation at the Institute for Continuing Legal Education, Douglas Hanna enjoys sharing his legal knowledge and experience with others. He has also appeared in numerous articles published in the New Jersey Law Journal and in Jury Verdict Review & Analysis in respect to his case verdicts and settlements. The New York Times, Philadelphia Enquirer, the Asbury Park Press, and Newark Star-Ledger have interviewed Mr. Hanna regarding various of his cases as well. Further, Mr. Hanna is the author of an article entitled, “Expert Witnesses 101,” which appeared in New Jersey Lawyer Magazine in the August 2004 edition.